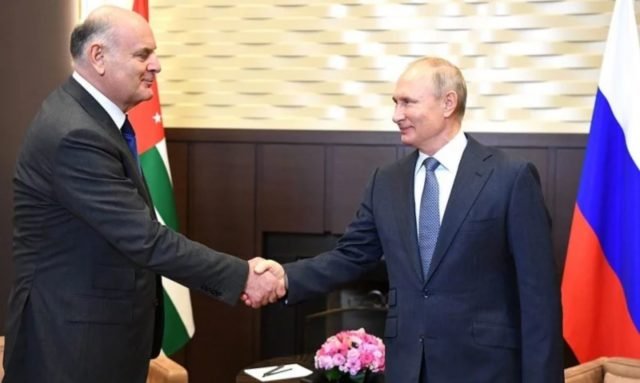 Abkhazian “President” Akhra Bzhania and Russian President Vladimir Putin, Sochi, November 12 (Source: kremlin.ru)
On November 24, the Georgian Ministry of Foreign Affairs strictly condemned Sukhumi and Moscow’s joint approval of a program to create a common socio-economic space uniting breakaway Abkhazia and Russia. Tbilisi slammed it as “another illegal step toward the de facto annexation” of its occupied region (Mfa.gov.ge, November 24). The initiative, formally titled “The Formation of a Common Socio-Economic Space Between the Russian Federation and the Republic of Abkhazia [sic] on the Basis of the Harmonization of Legislations,” was signed by both sides on November 12, after a three-hour-long meeting between Russian President Vladimir Putin and Abkhazia’s “head of state,” Aslan Bzhania, in Sochi. The text of the 46-point program only appeared on the official website of the Abkhazian president two weeks later (Presidentofabkhazia.org, November 24).
https://jamestown.org/program/abkhazia-bolsters-linkages-with-russia/