The United States has cut Ethiopia, Mali and Guinea out of a duty-free trade programme over alleged human rights violations and recent coups.

In a statement on Saturday, the US Trade Representative (USTR) said it terminated the three countries from the African Growth and Opportunity Act (AGOA) “due to actions taken by each of their governments in violation of the AGOA Statute”.

In September 2021, Alpha Conde — the octogenarian president of Guinea — was toppled by the special forces he created. It is the latest episode of political instability in the West African state with not only rich resources but also a history of military coups.

A Chinese foreign ministry spokesperson, in an unusual move, spoke against the military coup and urged the immediate release of the former president. This is a departure from Beijing’s cardinal foreign policy dictate of non-interference in other countries’ domestic affairs.

China has a big stake in the country. Guinea is China’s biggest supplier of bauxite, a key raw material for the aluminium industry. But perhaps more importantly, Guinea is home to the world’s largest untapped iron ore deposit, Simandou.

Guinea’s military government has named Mohamed Beavogui, a former civil servant and expert in agricultural finance, as prime minister to preside over a promised transition back to democratic rule following last month’s coup.

Beavogui, whose nomination was announced on Wednesday on national television, had a prestigious career with international organisations, including the United Nations, but has no national government experience – potentially distancing him from the Guinean political infighting of recent years. 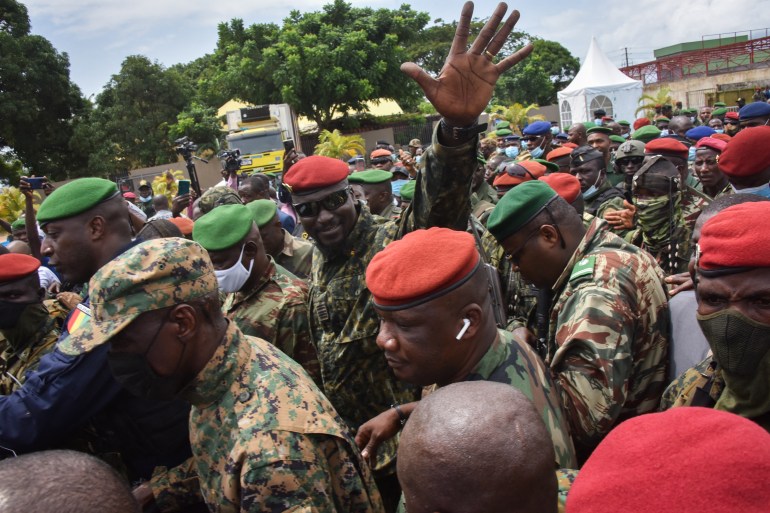 Guinea has sworn in Colonel Mamady Doumbouya as interim president, who promised to respect the West African state’s international commitments while transitioning to civilian rule.

Doumbouya, who led the overthrow of President Alpha Conde on September 5, was sworn in on Friday by Supreme Court head Mamadou Sylla for a transition period of unspecified length.

Pramila Patten called for accountability for the 28 September 2009 incident to be at the heart of the country’s political transition.

The massacre occurred when security forces opened fire on thousands of demonstrators attending an opposition rally at a stadium in the capital, Conakry.  At least 156 people were killed or disappeared, and at least 109 women and girls were subjected to sexual violence.
Guinea: Justice for 2009 massacre must be at heart of political transition | | UN News