Chinese economy in 2020 expanded 2.3 percent, the country’s statistics bureau said on Monday, boosted by a strong recovery in the second half after consumption, investment and export all gained pace.

That made the country the only major economy in the world to eke out an expansion, while others, facing a voracious virus onslaught, contracted.

China’s accelerating economic rebound, largely owing to the government’s drastic measures to contain the virus, will help boost the confidence of all other economies where a resurgence of infection cases is still taking tolls. However, the broader rollout of Covid-19 inoculations is expected to stifle a wild spread of the contagion, economists said.

The unemployment rate was 5.2 percent at the end of December, the same as the previous month, indicating the country needs to maintain a moderate level of fiscal and financial stimulus in 2021 to pump up the economy and shore up employment.

The world’s second largest economy returned to its pre-Covid19 trajectory of growth, by an impressive 6.5 percent from October to December, picking up momentum from an expansion of 4.9 percent for July-September, and 3.2 percent for April-June. The economy plunged 6.8 percent in the first three months last year, battered by the Covid-19 outbreak, according to data released by the National Bureau of Statistics (NBS). 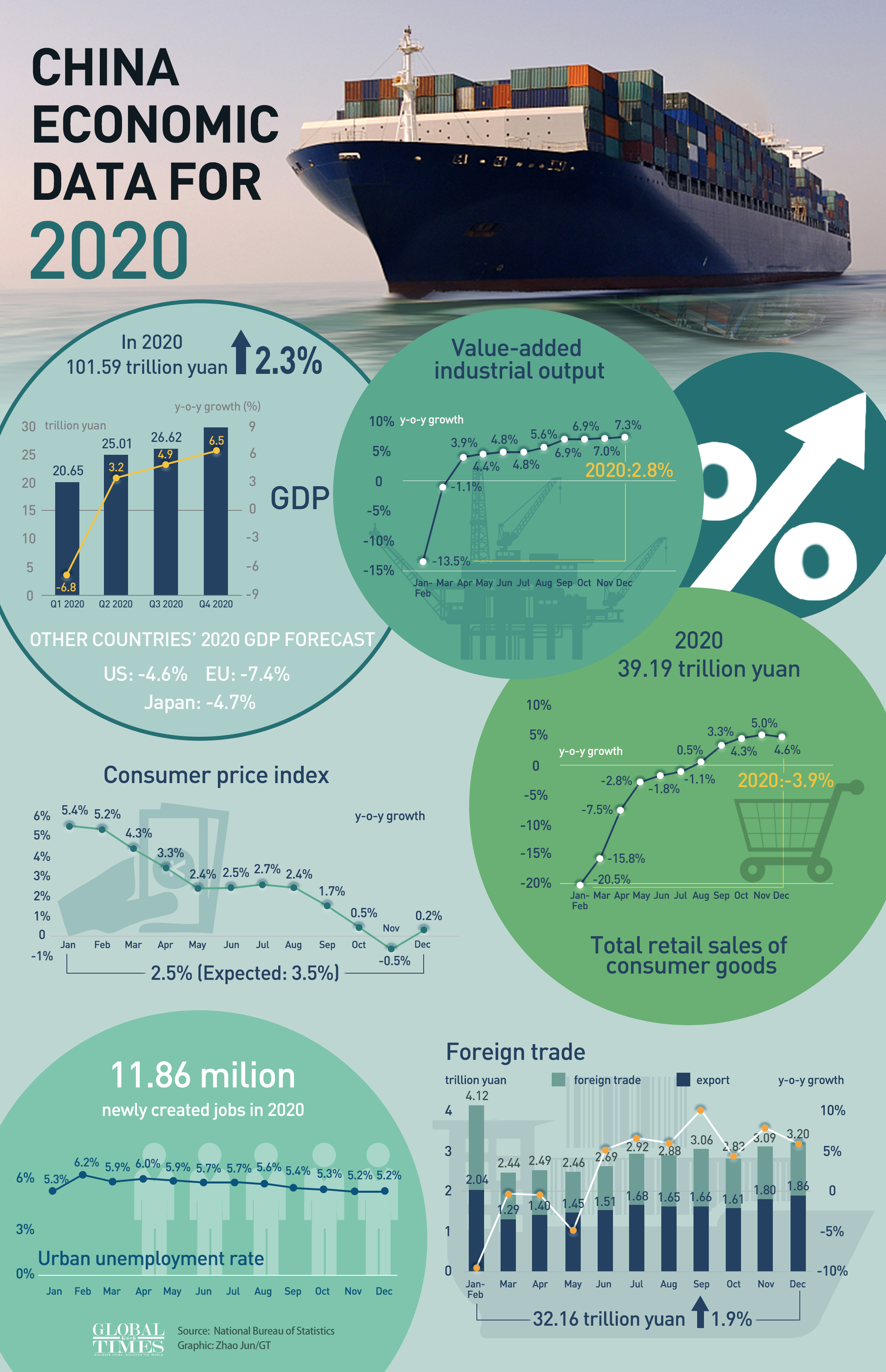 “The government’s strong anti-coronavirus measures that help effectively contained the spread of the virus, the flexible counter-cyclical macro-economic policies, as well as the efforts taken to deepen reform and opening up to the outside world, have all contributed to the better-than-expected economic results in 2020,” Cao Heping, a professor at the School of Economics of Peking University, told the Global Times on Monday.

Thanks to a slew of policies taken to stabilize foreign trade, China became the only economy in the world to achieve a positive commodity trade growth last year, with exports expanding by 3.6 percent to reach $2.59 trillion, data from the General Administration of Customs showed earlier.

China’s rapid economic recovery from the COVID-19 pandemic offers an encouraging insight into the post-coronavirus economic picture, according to experts. The World Bank said in its latest report that the collapse in global economic activity in 2020 is estimated to have been slightly less severe than previously thought, mainly due to shallower contractions in some advanced economies and a more robust revival in China.

Yu Miaojie, deputy dean with the National School of Development at Peking University, estimated that the contribution of China’s GDP to the global total will grow by 2 percentage points to 19 percent in 2020.

Yu estimated that China’s GDP growth rate in 2021 will probably hit 7.5-8 percent – the fastest among the top 10 economies.

In the first year of the 14th Five-Year Plan (2021-25), a new round of opening-up measures – the establishment of the Hainan Free Trade Port zone, the signing of Regional Comprehensive Economic Partnership (RCEP), the completion of the China-EU Comprehensive Agreement on Investment (CAI) – as well as the implementation of the Belt and Road Initiative will help cement China’s standing in global industrial, supply and value chains, some economists noted.

In a research report sent to the Global Times on Friday, Wang Tao, chief economist at UBS China, said that a strong global recovery would also facilitate China’s exports to continuously grow, by estimated 10 percent in dollar terms in 2021.

Meanwhile, China’s domestic consumption is seen as a firm driver of the economy, as the government has phased in the all-important “Dual Circulation” development strategy that will see the domestic market be spruced up as the mainstay of growth, be supplemented by the international market.

With the rollout of vaccination drives throughout the nation, consumer confidence will be further lifted and pent-up domestic consumption will likely continue to fire up the economy in 2021, Cao noted.

“In order to release domestic consumption potential, prudent monetary policies should remain this year to enable small and medium-sized enterprises to have access to ample funds, which create about 90 percent of the jobs in the country,” Yu said, adding that taxation and fee cuts are also necessary to increase people’s disposable income.

“Although external environment has a bearing on Chinese economy, China’s economic growth mostly relies on itself in 2021,” He Weiwen, a former senior Chinese trade official, told the Global Times.

He predicted that the China-US economic and trade relationship is likely to improve after Joe Biden is inaugurated as new US president on January 20, as the incoming Biden administration may give up some of overly confrontational policies of Donald Trump, who is very anti-China.