Skip to the content
On December 28, 2020 a joint military exercise of the armed resistance organizations in the Gaza Strip was held. Led by Hamas, participants included 13 other organizations, including Islamic Jihad and groups of former Fatah members. In the large-scale exercise, rockets were launched toward the sea, attacks occurred on simulated IDF positions and included abductions of soldiers, and drones and other technologies were displayed. The exercise took place against the backdrop of a severe crisis in Gaza caused by the COVID-19 pandemic, the failure of the reconciliation efforts with the Palestinian Authority, Arab countries seemingly sidelining the Palestinian issue, and concerns of another military conflict with Israel. In addition, the exercise occurred close to the anniversary of the killing of Qasem Soleimani. Hamas and the other participants sought to send a deterrent message to Israel, even though they are not interested in a conflict, and to demonstrate to the Palestinian public, which has been critical of them, that the resistance is alive and well, and growing stronger.

On December 28, 2020, a military exercise was held in the Gaza Strip. It was the largest in scope since Hamas took over Gaza, and unprecedented in that it took place with the cooperation among the organizations active in the area. The exercise, which received extensive coverage in the Palestinian and Arab media and social networks, involved the participation of the military units of 13 Palestinian organizations, including groups of former Fatah members and even organizations with very little military force. Hamas and Islamic Jihad boasted the most significant military contributions. Naval forces, air forces, and rocket and other Hamas units took part in the exercise, which Hamas directed from a joint war room with the other organizations. Media reports and commentaries magnified the capabilities demonstrated by the participating organizations and the intensified buildup by the Hamas-led Palestinian resistance.

The exercise took place against the background of a deep internal and external Palestinian crisis. On the one hand, Israel threatens, carries out exercises near Gaza, and warns against increasing the tension in the area. Efforts to reach an arrangement with Israel, mediated by Egypt, have not progressed, and Cairo blames Hamas for their failure. On the other hand, the reconciliation efforts between Hamas and the Palestinian Authority have stalled after the PA chose to renew the security and civil coordination with Israel and accept the tax monies collected by Israel. In the region, the normalization with Israel presents as a significant trend, and the Palestinian issue is declining in importance. Furthermore, the already serious humanitarian situation in Gaza has worsened because of the COVID-19 pandemic.

The exercise was preceded by cognitive preparations, which focused on threatening rhetoric toward Israel – although the messages were not very blunt, and some were implicit. Hamas’s spokespeople emphasized the inter-organizational cooperation and an improvement in the military strength of the armed resistance, in order to send Israel a deterrent message. The second, parallel message was directed to the Palestinian public regarding the importance of unity and the continuation of the resistance to Israel as the forefront of the national struggle.

Close to the exercise, pictures of Qasem Soleimani, the commander of the Iranian Quds Force, were distributed throughout Gaza to mark the first anniversary of his killing by American forces. The pictures glorified him and his contribution to the Palestinian resistance. Senior Hamas and Islamic Jihad spokespeople praised the major assistance that Soleimani had extended to the Palestinian resistance organizations. In addition, there were reports that the exercise took place in some form of coordination with Iran – which could indicate, assuming that these reports are credible, a rapprochement between Hamas and the axis of resistance after the ongoing faltering of the intra-Palestinian reconciliation efforts. Therefore, even if Tehran did not work behind the scenes to organize the show of force, it serves the deterrence equation that it is trying to create and consolidate vis-à-vis Israel.

Along with its being understood as an attempt to broadcast strength and deterrence, the exercise can be interpreted as an expression of weakness or an attempt by Hamas to compensate for it – vis-à-vis Israel and the local population, which is groaning under the burden of the humanitarian crisis and the COVID-19 pandemic, without expectations of a significant improvement in its situation in the foreseeable future. 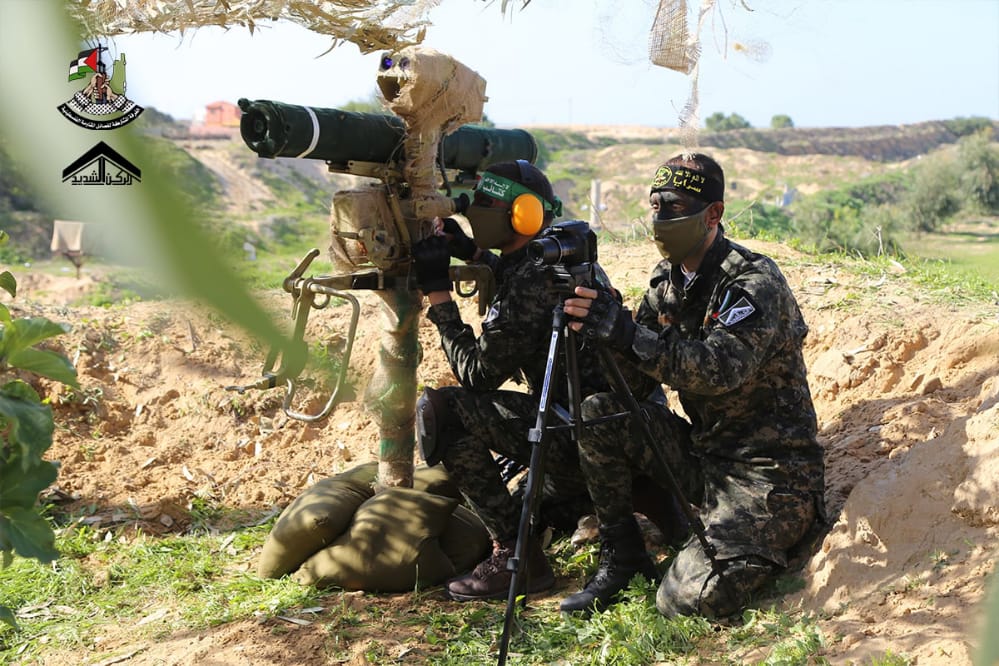 Consequently, the exercise should be considered an action that carried overt and clear messages to specific target audiences, along with implicit messages directed at other target audiences. Hamas is faced with a dilemma in its efforts not to lose relevance, while over the past few years it has been engaged in restraining the forces active in Gaza from launching rockets toward Israel in order to prevent renewed escalation. The organization’s leadership is forced to explain why the resistance has in effect been suspended since the large-scale conflict with Israel in the summer of 2014, why it is not realizing its threats, and what is its proposed alternative to a direct struggle against Israel. It is hard pressed to cope with the claim frequently voiced against it in the Palestinian arena that the resistance is encircled (محاصرة), that is, does not control the agenda. Israel’s strength creates deterrence, Palestinian weakness intensifies, and any action by the resistance requires considering the risks involved in it. Thus, inter alia the military exercise aimed to tell the public: do not feel helpless, the resistance has not died, and it is even getting stronger and gaining capabilities that will be manifested when the time comes.Furthermore, the exercise sent the message that Hamas succeeds in uniting various factions under one flag, and therefore the unity on the battlefield should also be expressed in reconciliation on the national level. This message can be interpreted as defiance toward the Palestinian Authority and Abu Mazen, who are blamed, albeit in weaker language than in the past, for foiling the most recent reconciliation attempt by virtue of the decision to renew the security and civil coordination with Israel – a step that was seen by Hamas as subservience, weakness, and a departure from the principles of the national struggle.

With respect to Israel, the exercise was intended to foster a sense of deterrence – complementing the sporadic rocket fire toward Israeli territory – while drawing attention to the strengths and range of military capabilities of Hamas and the other Palestinian organizations, which operate in cooperation and unity as a force multiplier. The warning addresses Israel’s intentions regarding the Gaza Strip, as understood from exercises that the IDF conducted recently and from statements by Israeli leaders and senior commanders. 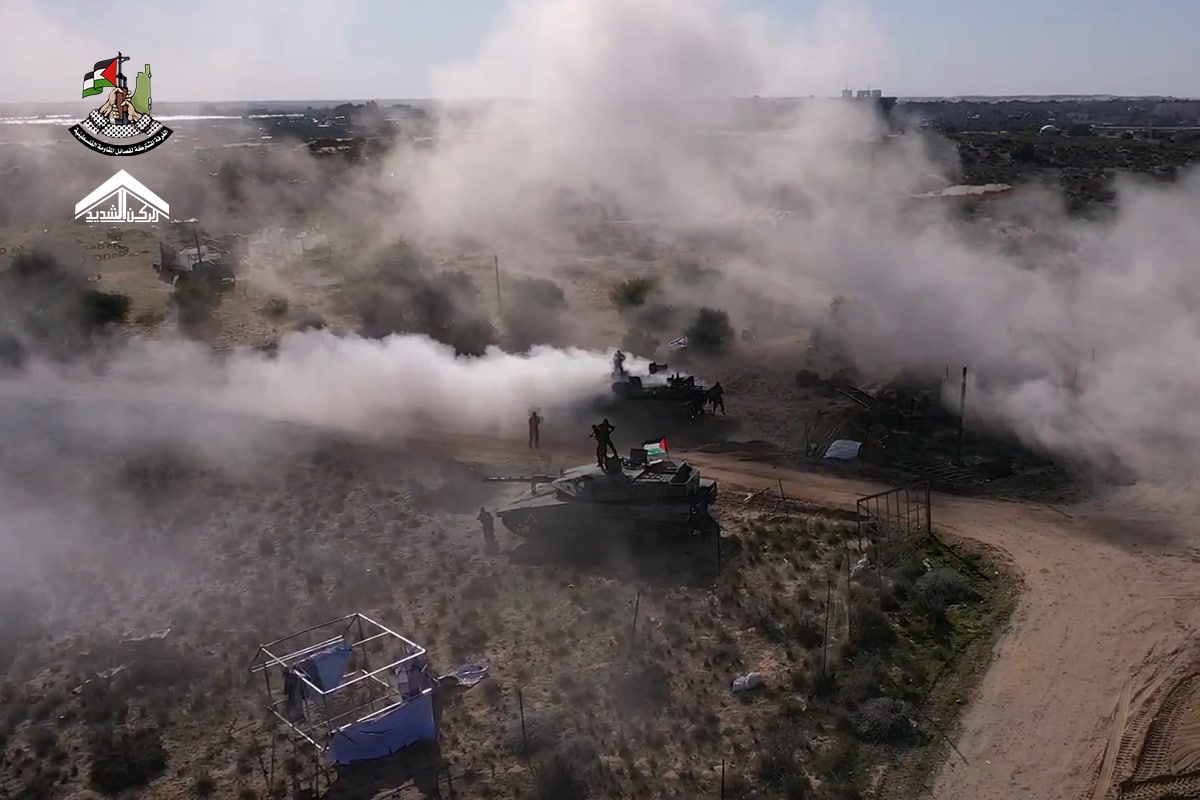 It is also possible that the exercise aimed to strengthen the ranks of Hamas itself and to encourage elements in the organization’s military wing, who are frustrated that its leadership does not pursue a more militant policy. In recent years, Hamas leader in Gaza Yahya Sinwar has argued that the nature of the struggle should be adapted to the conditions of time and place, with the current time, according to his approach, demanding the prioritization of popular struggle and not armed struggle.

Another intended audience was Egypt, the main mediator of the efforts to broker an arrangement between Hamas and Israel. An Egyptian delegation that visited Gaza two days before the exercise asked for clarifications regarding it. Cairo has voiced anger toward Hamas, for what is seen in Egypt as derailing the efforts to reach an arrangement and operating under the encouragement and direction of Iran, Turkey, and Qatar. For its part, the Hamas leadership sought to emphasize by means of the exercise that is empowered by military strength, that the organization enjoys effective control within the territory of Gaza and over the population, as well as over the other armed organizations active there, and that it has a response to Israel’s military force. In effect, Hamas seeks to tell Cairo that it should ease the pressure on it to move closer to Israel’s conditions for an arrangement, which are perceived to be favored by Egypt. The recent removal from Gaza of the offices of the Egyptian diplomatic mission (which was closed since Hamas took over Gaza in 2007) strengthens this impression.

At the same time, Hamas’s military show of force can be seen as an attempt to compensate for weakness vis-à-vis the local population in Gaza and rogue factions. The serious humanitarian plight in the Gaza Strip could fan the flames of popular protest, which, if it spirals out of control, could create suitable conditions for Israel and the Palestinian Authority, backed by Israel and the protest, to retake control of the Gaza Strip and dismantle Hamas’s military infrastructure. The loss of Hamas’s main asset, control of Gaza, could set it back years. It could also critically damage Hamas’s standing as the leader of the resistance, as well as its efforts to integrate within the Palestinian Authority and the PLO and to serve as an alternative to Fatah. This is the background to the fact that Hamas continues to demonstrate a desire for reconciliation and willingness for concessions.

From Israel’s perspective, the military exercise held in the Gaza Strip does not have far-reaching military or security implications. Nor does it indicate intentions of escalation on the part of Hamas: organizers are aware of the attention that any demonstration of force attracts in Israel and see the widespread media coverage and accompanying commentary as an achievement. At the same time, perhaps a new realm of opportunity has been created to accelerate and advance the efforts toward an arrangement with Hamas. Hamas’s weakness and its fear of a loss of control due to the severe conditions in Gaza, Israel’s deterrence capability, and its ability to provide medical aid and to enhance humanitarian aid efforts, in addition to the potential for raising donations to Gaza from Arab countries by virtue of the normalization agreement, could help advance a long-term arrangement. Realization of such an arrangement is an essential Israeli interest toward an improved security situation in the south and an improved health and humanitarian infrastructure in the Gaza Strip, and helps undermine the Iranian threat, because given an escalation in the northern arena, Hamas will join the Iranian effort for a simultaneous conflict with Israel.