With the advent of New Space, Russia is engaged in a race against time to preserve one of its major industrial assets. 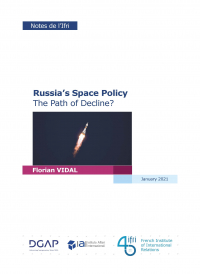 In recent decades, the country has managed the space sector like a rental business, whereby it has long enjoyed a quasi-monopoly situation in relation to low-orbit launchers, thanks to the Soyuz rocket. While Russia perceives the space sector as an instrument of power, its industry is essentially based on obsolete organization and infrastructure.

The establishment of the Roscosmos State Corporation in 2015 was intended to accelerate the transformation of the space sector, which is lagging behind, while the competition for space now includes several dimensions (military doctrine, development of the market for civil applications, scientific exploration, and new business segments still in development, such as tourism). On the one hand, the reorganization of the sector aims to rationalize its programs according to budget constraints as well as socio-economic, technological and infrastructural realities while Russia is subject to Western sanctions. On the other hand, to enhance the value of this economic segment at the international level, Russia aims to uphold its strategic autonomy; i.e. to have a tool enabling it to act on its own and be able to promote its industry on the global market. To do this, the country is counting on three axes of development: 1) the Vostochny Cosmodrome; 2) the development of a new range of launchers, and 3) the maintenance of a satellite constellation. However, the progress of these three pillars of modernization displays uneven results. Overall, the reforms undertaken since 2015 are too limited in scope to reverse a programmed erosion of market share, even though the sector will retain niche segments that could provide the basis for international cooperation.

Therefore, it is necessary, first of all, to examine the scope of the restructuring of the Russian space sector as well as its limits and, secondly, to put into perspective the successes and failures of a sector threatened by decline. In a highly competitive international environment, the attempt to upgrade this sector challenges Russia’s credibility with its partners, particularly Europe. Nevertheless, Russian-European cooperation has proved to be resilient beyond the political and economic circumstances.