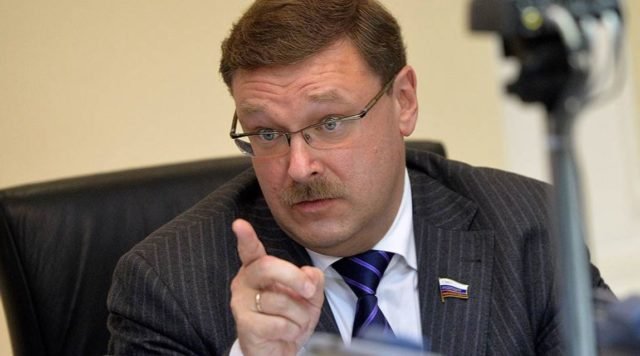 While a group of right-wing Donald Trump supporters caused havoc in Washington, DC, on January 6, 2021, Moscow officials were celebrating Orthodox Christmas Eve. President Vladimir Putin and his cohorts were attending mass, state TV channels were broadcasting live church services instead of political commentary, and the Russian capital was essentially closed for all official business. Moscow’s reaction to the riots and sacking of the United States Congress was, therefore, not immediate and not well orchestrated. The kneejerk reactions of the Russian authorities mostly took the form of gloating about the US’s failure to do things properly. The chair of the Federation Council (upper chamber of the Russian parliament) Foreign Affairs Committee, Konstantin Kosachev, wrote on his Facebook page, “America is split in half, its political two-party system has failed, its elections are rigged, and Trump is an eccentric narcissist venturer pretending to maintain course at the helm of a sinking ship.” Kosachev’s bottom line: the United States must never again try to instruct others how to conduct democratic elections (TASS, January 7, 2021). The speaker of the State Duma (lower chamber of parliament), Vyacheslav Volodin, insisted the US needs to enact constitutional reforms to abolish the outdated Electoral College, which he characterized as essentially undemocratic and which thwarts the will of the people, who should be electing their leaders directly, like in Russia. “America must better concentrate its efforts on solving its own problems and stop interfering in the affairs of other nations,” Volodin declared (Interfax, January 7, 2021).

Putin, who has held supreme power in Russia for two decades, had previously also publicly scorned the Electoral College system as “undemocratic.” And today, the Russian Ministry of Foreign Affairs specifically identified the “archaic Electoral College” as the main cause of yesterday’s turmoil on Capitol Hill. Russian propaganda is currently reproaching Washington for having witnessed its own “colored revolution,” allegedly putting it on par with Kyrgyzstan and its capital Bishkek (Interfax, January 7, 2021).

The attack on the US Capitol was followed several hours later with an overwhelming vote by Congress to reject all objections to the certification of Joseph Biden and Kamala Harris’ November election victory. The ruling class in the US looks to have closed ranks in the face of Wednesday’s chaotic events for the time being, while President Trump could feasibly face the threat of another impeachment in the coming days that might ban him from holding public office ever again. This was hardly the outcome Moscow anticipated. On January 3, Russia’s flamboyant nationalist politician Vladimir Zhirinovsky, who often articulates backroom Kremlin opinions, wrote on his personal Telegram channel, “Trump still has a chance to stay on as president. He may declare an emergency and use his extensive powers and the military to overturn the election results—if only he has the will and courage to act” (T.me/zhirinovskylive, January 3, 2021).

On January 6, just before the violent breach of the Capitol building, the website of Tsargrad TV, owned by the conservative Russian Orthodox pro-Putin billionaire Konstantin Malofeev (under US sanctions for his role in destabilizing Ukraine), published a detailed prognosis scenario of how events in Washington were likely to play out that day as Congress undertook the certification of the Electoral College vote. The online article predicted Vice President Michael Pence would stand strong for Trump, supported by the Republic Party and the President’s stirred-up base. Pence would dismiss the “fraudulent Electoral College votes” cast for Biden/Harris during the joint session of Congress. At that point, Trump would supposedly declare martial law and send federal troops into swing states. Swiftly organized military tribunals would overturn the election results and Trump would triumphantly secure his second term. The alternative scenario, according to the Tsargrad TV piece, was full capitulation and defeat, since by January 6, 2021, “Trump had his back to the wall after the Democrats have stolen [sic] the presidential election and also the Georgia senate races. Only martial law may prevent a full takeover of power by the Democrats” (Tsargrad TV, January 6, 2021).

As seen from Moscow, Trump and his team ultimately lacked the “will and courage to act” and purge their enemies. Veterans of the Russian Federal Security Service (FSB) have decried the performance of the US security forces guarding the Capitol on January 6 as totally inadequate, unprofessional and possibly “politically motivated by sympathy for the attackers” (RIA Novosti, January 2, 2021). In the Russian leadership’s eyes, Pence failed to stand up for Trump, and now Moscow will be forced to live with the consequences. According to a leading expert from the Russia State Institute of USA and Canada, Vladimir Vasiliev, “The American people still believe in Trump and do not recognize the election results [sic],” so the incoming Biden administration will not dare to indict or imprison Trump. More mass civil violence is possible in the United States, as occurred in the 1960s and 1970s. The only way to stabilize a deeply split America is to find a unifying common enemy: Russia and/or China (Moskovsky Komsomolets, January 7, 2021).

Optimism still exists in Moscow that the Biden administration will, at the last minute, prolong the New START nuclear arms control treaty, which expires on February 5, 2021; but that seems to be the only bright spot in an increasingly gloomy future (see EDM, December 17, 2020). Moscow is bracing for new punitive sanctions as punishment for the massive cyberattack allegedly by Russian intelligence–connected hackers. The Russian authorities deny any involvement or responsibility. Another outstanding case is the August 2020 poisoning of Russian opposition leader Alexei Navalny via the Novichok nerve agent, in Tomsk. In March 2018, former double agent and Russian military intelligence colonel Sergei Skripal along with his daughter Yulia were poisoned by Novichok in Salisbury, England. In response, Washington at that time referenced the 1991 US Chemical and Biological Weapons Control and Warfare Elimination Act, which requires severe punitive sanctions against countries that produce and use chemical weapons of mass destruction; but the Trump administration ultimately refused to enact them. Now, however, both Russian cyber hacking and Skripal nerve agent attacks may serve as justification for additional US sanctions against Moscow. The pro-Kremlin news site Vzglad believes the Biden administration will understand that the real US enemy is China, which is economically much stronger than Russia and has a military that is growing in power much faster. Moscow seems to hold out hope that the Biden team will overlook Russian transgressions in order to deal with the much more serious Chinese treat (Vzglyad, January 2, 2021). But such hopes may prove misplaced.