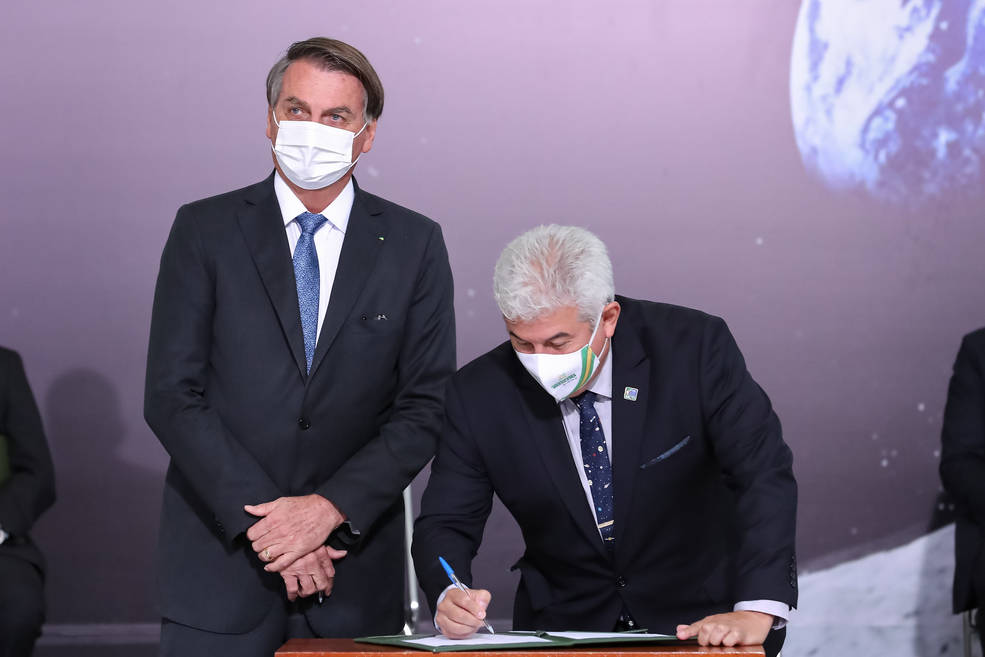 Brazil Minister of Science, Technology, and Innovation Marcos Pontes signs the Artemis Accords as President Jair Bolsonaro looks on during a ceremony at the Palácio do Planalto in Brasilia Tuesday, June 15, 2021. Credits: Marcos Corrêa/PR

Brazil is the latest country to sign the Artemis Accords, affirming its commitment to ensuring sustainable space exploration that adheres to a common set of principles benefiting all of humanity.

Brazil Minister of Science, Technology, and Innovation Marcos Pontes signed the document during a ceremony June 15 in Brasília that featured President Jair Bolsonaro, Minister of Foreign Affairs Carlos Alberto França, and other officials.

“NASA has been looking forward to this day since last December when Minister Pontes and former NASA Administrator Jim Bridenstine signed a statement of intent regarding potential cooperation in the Artemis program,” said NASA Administrator Bill Nelson. “In undertaking this important commitment, Brazil is positioned to be a leader in safe and sustainable exploration.”

Brazil is the 12th country to sign the Artemis Accords and first in South America to do so. It joins Australia, Canada, Italy, Japan, Luxembourg, the Republic of Korea, New Zealand, the United Kingdom, the United Arab Emirates, Ukraine, and the United States in signing the document, which establishes a practical set of principles to guide space exploration cooperation among nations participating in NASA’s 21st century lunar exploration plans. Brazil is the third nation to sign the Artemis Accords under the Biden-Harris Administration, following the Republic of Korea and New Zealand.

“The signing of Artemis Accords is a historic moment for Brazil. Together with the U.S. and other countries we will have the opportunity to explore the Moon and initiate infinite other possibilities for international cooperation,” said Pontes. “We are promoting a great national effort, with the involvement of the Government and the Brazilian space industry. As an astronaut and Minister of Science, Technology and Innovation, it is an honor for me to sign Brazil’s adhesion to the Artemis Accords.”

NASA, in coordination with the U.S. Department of State, announced the establishment of the Artemis Accords in 2020. The Artemis Accords reinforce and implement the 1967 Treaty on Principles Governing the Activities of States in the Exploration and Use of Outer Space, Including the Moon and Other Celestial Bodies, otherwise known as the Outer Space Treaty. They also reinforce the commitment by the United States and partner nations to the Registration Convention, the Agreement on the Rescue of Astronauts, and other norms of behavior that NASA and its partners have supported, including the public release of scientific data.

Additional countries will join the Artemis Accords in the months and years ahead, as NASA continues to work with its international partners to establish a safe, peaceful, and prosperous future in space. Working with both new and existing partners will add new energy and capabilities to ensure the entire world can benefit from our journey of exploration and discovery.

Learn more about the Artemis Accords at: