Last week, the Centre released the ‘National Monetisation Pipeline’, a document listing the various public assets that will be leased out to private companies over the next four years. The government believes that monetising underutilised public assets will bring in almost ₹6 lakh crore to the government and help build new infrastructure to boost the economy. The Opposition has accused the government of selling off valuable national assets to “crony capitalists”.

Here we discuss this move.

Is monetising public assets a good idea? | The Hindu Parley podcast – The Hindu

Business Standard sits down with renowned economist and former deputy chairman of the Planning Commission, Montek Singh Ahluwalia, to get answers to crucial questions on the economy

In March 1990, an Indian Air Force IL-76 took off from Trincomalee, in eastern Sri Lanka, en route to Mauritius. On board was Tamil leader V Perumal, the Northeast provincial council’s chief minister, along with his family and some 200 supporters, among India’s closest allies on the island.

Perumal’s organisation, the Eelam People’s Revolutionary Liberation Front, had paid a bloody price for standing by India’s peacekeeping mission. So when India withdrew in defeat, it evacuated him as well as well as thousands of other threatened Sri Lankan Tamils. This was not merely about moral principle, but also out of interest to protect its assets and keep leverage over Sri Lanka.

In this edition of Sambandh Scholars Speak, Riya Sinha interviews Sanjay Kathuria and Priya Mathur on their co-edited book, Playing to Strengths: A Policy Framework for Mainstreaming Northeast India, published by The World Bank in 2020.

Following the Taliban’s sudden takeover in Afghanistan in August, India closed its five diplomatic missions in the country. However, this was a rare exception to India’s recent trend of expanding its diplomatic network in South Asia.

Our ongoing research finds that over the last 20 years, India opened or reopened thirteen new consulates in seven of its eight immediate neighboring countries (excluding China). This means that since 2001, India has opened approximately twice as many new missions in the region as it did in the previous fifty years altogether.

These new consulates and other missions are the most visible aspect of India’s subnational footprint across the region, going beyond traditional embassies or high commissions situated in capital cities. Located in second-tier cities or peripheral regions, often in the neighbor’s borderlands, these smaller missions spearhead the widening reach of India’s subnational engagements in South Asia. India’s new consulates reflect the country’s expanding interests in the region, dealing with an increasingly large set of subnational entities in neighboring countries, including local or provincial authorities, minority groups, and economic actors.

Following the EU-India summit in May 2021, talks on both an EU-India trade and an investment agreement have resumed. This analysis provides background on where EU India economic relations stand and why it is important to maintain momentum following this breakthrough, despite a somewhat unpromising domestic political environment in India.

This new impetus largely reflects a transformed geopolitical landscape since the last round of EU-India talks were abandoned in 2013. The increased tension between India and China, as well as the EU’s intent to reduce its reliance on Chinese manufacturing have created the conditions for changes in policy by both parties. However, many of the issues that bedeviled the 2007-2013 negotiations remain unresolved. In this analysis, we provide an overview of EU-India trade and investment relations as well as the major topics in these negotiations. The impact of key global initiatives on climate change and WTO reform that will shape the negotiations is also briefly discussed.

Based on this analysis, we discuss three potential ways forward for EU-India trade and investment negotiations: a comprehensive agreement similar to that reached between the EU and Vietnam; a limited investment deal primarily focused on manufacturing; and a reinforced status quo with trade and investment relations growing organically under the existing multilateral umbrella.

Aiming to secure their marine resources in the Bay of Bengal, India and Bangladesh settled their maritime boundary in 2014. Despite the delimitation, however, fishers from both countries continue to commit unlawful forays into each other’s sovereign waters, leading to the enforcement of punitive measures against those accused or convicted. Such incidents not only jeopardise the fishers’ livelihoods, but repeated occurrences also nettle relations between the two countries. This paper calls for a proactive strategy for India and Bangladesh to engage in meaningful diplomatic collaboration to reduce the incidence of trespassing by fishermen, in particular through the development of Blue Economy.

In the last few years, India has conducted bilateral dialogues with Central Asia, the most recent one being the 2nd India-Central Asia Dialogue in October 2020. The Shanghai Cooperation Organisation (SCO) and Conference on Interaction and Confidence-Building Measures in Asia (CICA) meetings provide regular channels for communication with the region and even Prime Minister Narendra Modi has visited the region to meet Central Asian leaders and vice-versa. In spite of regular engagements, stable relations as well as historical and cultural linkages with Central Asia, India has arguably remained a nominal actor in the region. But, owing to the ongoing developments in Afghanistan and its vested interests there, bolstering ties with the Central Asian states would be highly beneficial for India. 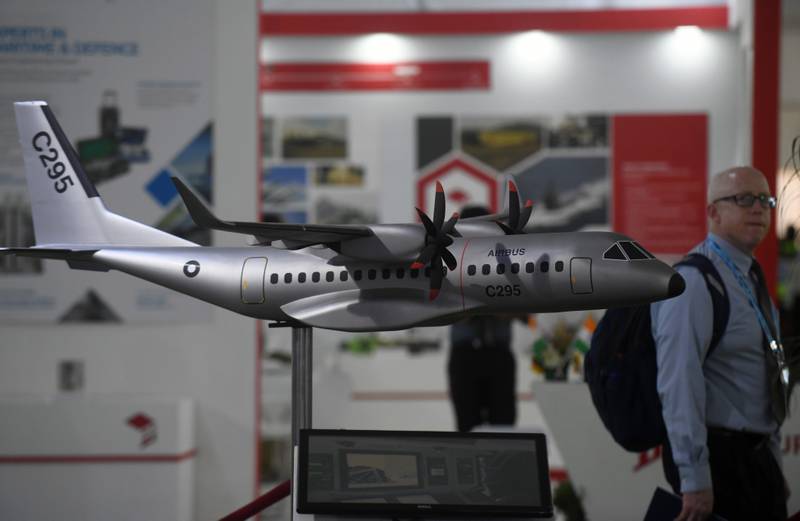 Vistors walk past a model of the Airbus C295 at DefExpo on the outskirts of Chennai, India, on April 13, 2018. (Arun Sankar/AFP via Getty Images)

The Indian government on Wednesday approved a procurement request for 56 C295 transport aircraft from Airbus Defence and Space in Spain, under which 40 military planes will be manufactured in India by local firm Tata Group.

The approval was granted Sept. 8 by the Indian government’s apex armament clearance body, the Cabinet Committee on Security, which is led by Prime Minister Narendra Modi. This is the first project of its kind in which a military aircraft will be manufactured in India under technology transfer by a private company, according to Ministry of Defence release.