Zaakhir Asmal and Christopher Rooney write: The COVID-19 pandemic has hit several sectors of economies, including those in Africa particularly hard. The affected sectors include industries without smokestacks (IWOSS). The purpose of this brief is to conduct an early assessment of the effect of the pandemic on the economy, and specifically, the IWOSS sectors considered in the country case study, both in terms of the pandemic’s current impact, as well as to present a view on the long-term sectoral impact.

go to Brookings: The impact of COVID-19 on industries without smokestacks in South Africa (brookings.edu)

Al Jazeera writes: As many as 75 percent of young South Africans are unemployed. In any other country that would be cause for a revolution, according to one South African economist. Why did rioting and looting sweep the country last week? And could violence erupt again? This week, The Take explores the vast inequality and economic hardships behind South Africa’s latest unrest.

Al  Jazeera writes: Pfizer and BioNTech have said they struck a deal with South Africa-based company Biovac for the production of COVID-19 vaccines for the African Union (AU). In a statement published on Wednesday, the two companies said Cape Town-based Biovac will complete the last step in the manufacturing process, known as “fill and finish”, of the BioNTech-Pfizer vaccine.

Benjamin Fogel writes for Al Jazeera: Over the last 11 days South Africa has been engulfed by the worst unrest and mass violence since the end of apartheid. While things have settled into an uneasy calm as the military patrol the worst-hit areas, the nation remains anxious and fearful. Speaking to the country last Thursday evening, President Cyril Ramaphosa described the unrest as an insurrection targeting the country’s economy and infrastructure. The insurrection, triggered by ex-President Jacob Zuma’s imprisonment for contempt of court on July 7, has already seen at least 212 deaths, the supply chain of an entire province destroyed, billions of dollars worth of damage inflicted on two of the country’s major cities, and hundreds of businesses and key parts of the country’s infrastructure burned to the ground.

go to Al Jazeera website: The insurrection in South Africa is about more than freeing Zuma | Corruption | Al Jazeera

Al Jazeera writes: The long-running corruption trial of South Africa’s former President Jacob Zuma, whose imprisonment on a separate charge sparked days of deadly unrests and looting across the country, has resumed. Zuma appeared virtually in the Pietermaritzburg High Court on Monday, where he faces 16 charges of fraud, corruption and racketeering related to the 1999 purchase of fighter jets, patrol boats and military gear from five European arms firms when he was deputy president.

Tafi Mhaka writes for Al Jazeera: At the 47th G7 summit held in the United Kingdom in June, South Africa was the only African country to be invited. In an interview held on the sidelines, President Cyril Ramaphosa stated that he believed ordinary South Africans had confidence in his government and things were actually looking “pretty good” for South Africa

Al Jazeera writes: South African President Cyril Ramaphosa has joined post-riot clean-up efforts as his government warned against vigilantism and sought to avert racial conflict following days of unrest. The country was gripped by more than a week of chaos in which more than 200 people were killed as looters ransacked shopping centres and rioters torched key industrial infrastructure and blocked trade routes.

Nickolaus Bauer writes for Al Jazeera: South Africa is facing its worst unrest in decades as protests over the jailing of former President Jacob Zuma have led to spiralling violence and looting. 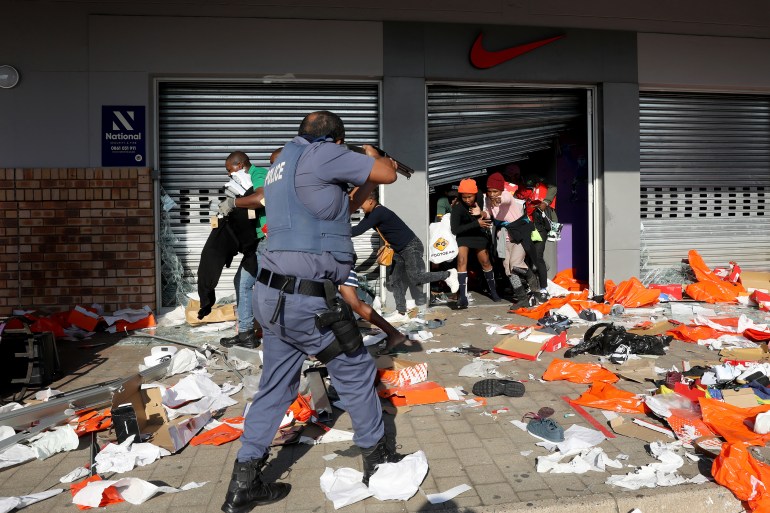