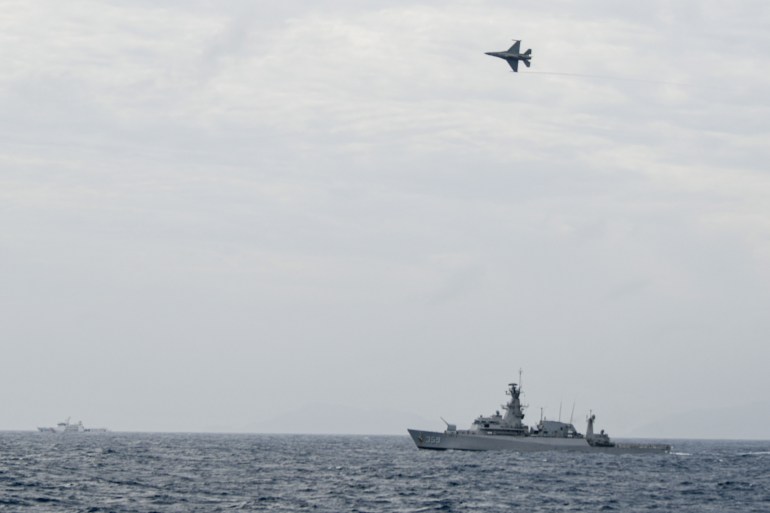 An Indonesian Airforce’s F-16 Jet Fighter flies over Indonesian navy warship during an operation in Natuna islands, in the South China Sea in January 2020 [File: M Risyal Hidayat/Antara via Reuters]

Indonesia’s navy has increased patrols around its Natuna islands in the South China Sea after Chinese and US vessels were detected nearby in international waters, despite saying there the vessels had not caused any disturbance, a navy official said.

European Union members will step up their advocacy of open access to the disputed South China Sea, a key world trade route, despite Chinese claims to nearly all of it as they discuss the issue with Southeast Asian countries, analysts believe.

The 27 EU members, such as France and Germany, hope all countries can follow United Nations maritime rules in the South China Sea to ensure consistency with other world waterways and to protect a booming seaborne trade in goods with Asia, the experts say.

Why the EU Sides with Southeast Asia in the South China Sea Dispute | Voice of America – English (voanews.com) 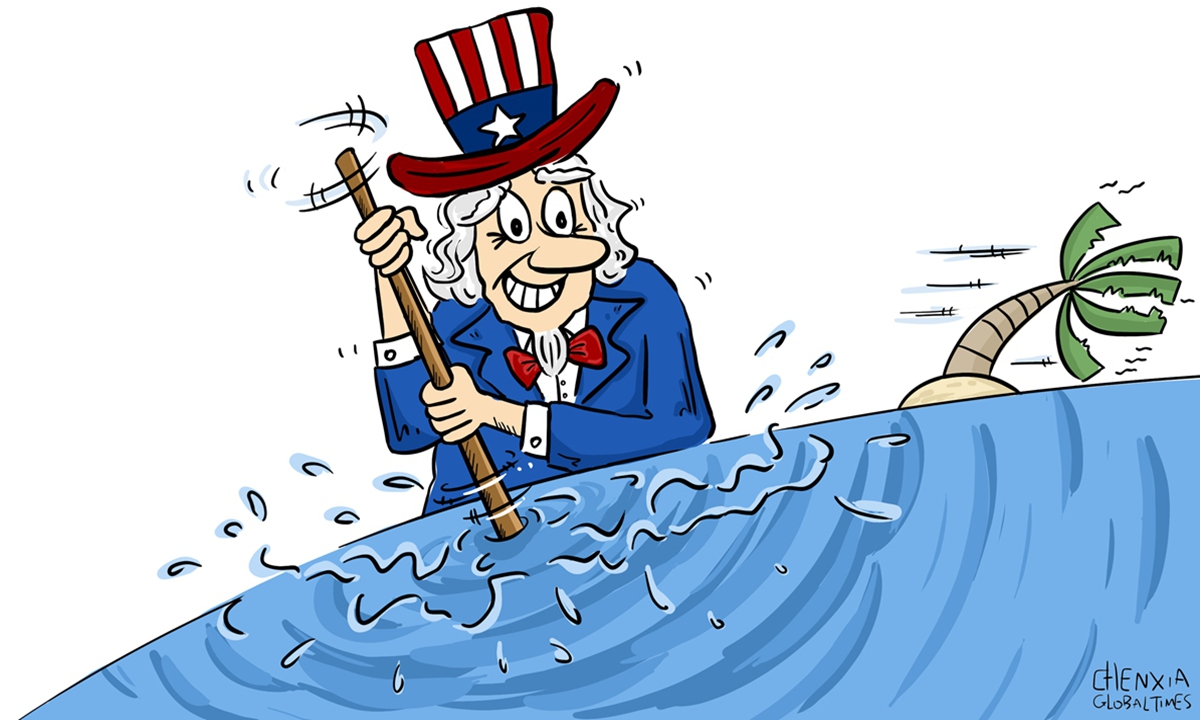 US Vice President Kamala Harris is scheduled to leave Washington Friday for a planned visit to Singapore and Vietnam. According to Reuters earlier this month, a senior White House official said Harris will focus on defending international rules in the South China Sea, strengthening US regional leadership and expanding security cooperation during the trip.

The US has become the biggest threat to peace and stability in the South China Sea by arbitrarily sending advanced military vessels and aircraft to the region as provocations. The country itself is not qualified to make any remarks on the issue of the South China Sea, said a Chinese envoy.

US ‘not qualified’ to make remarks on issue of South China Sea: Chinese envoy  – Global Times

Aristyo Rizka Darmawan writes: The South China Sea became an important highlight of the recent ASEAN Defence Ministers’ Meeting-Plus. All delegations agreed that maintaining peace and security in the disputed area is one of the most important issues in the region and called for unity in the defence sector. To keep the peace it will be necessary to preserve the momentum in the negotiations for a South China Sea Code of Conduct (COC).

Lan Anh Nguyen Dang writes for Jamestown Foundation: A new People’s Republic of China (PRC) Coast Guard Law (中华人民共和国海警法,Zhonghua renmin gongheguo haijing fa) caught regional and international attention at the beginning of the year (Vnexpress, January 30; Kyodo News, February 9; Inquirer, February 12; South China Morning Post, February 25). It is one of many notable legislative projects in the maritime and security domain that the Standing Committee of China’s 13th National People’s Congress (全国人大常委会,quanguo renda changwei hui) has deliberated and passed during the last year and a half.

Adam Leong Kok Wey writes for RUSI: On 31 May 2021, the People’s Liberation Army Air Force (PLAAF) flew squadron-sized multi-role strategic airlifters, consisting of Ilyushin Il-76 and Xian Y-20 aircraft, over Malaysia’s Exclusive Economic Zone waters and the South Luconia Shoals (Beting Pattingi Ali), and reached about 60 miles off Sarawak’s coast. After repeated requests by air controllers for identification and the purpose of the PLAAF flight went unanswered, the Royal Malaysian Air Force (RMAF) scrambled Hawk 208 light fighter jets to intercept, which resulted in the PLAAF formation turning back. According to the RMAF, the PLAAF aircraft flew in tactical formation over the maritime waters that are claimed by China as part of its ‘nine-dash line’ contention over the South China Sea.

Liu Xuanzun writes for Global Times: The Chinese People’s Liberation Army (PLA) forces expelled a US Navy destroyer that trespassed into Chinese territorial waters in the South China Sea on Monday, the day that coincided with the fifth anniversary of the so-called South China Sea Arbitration ruling. 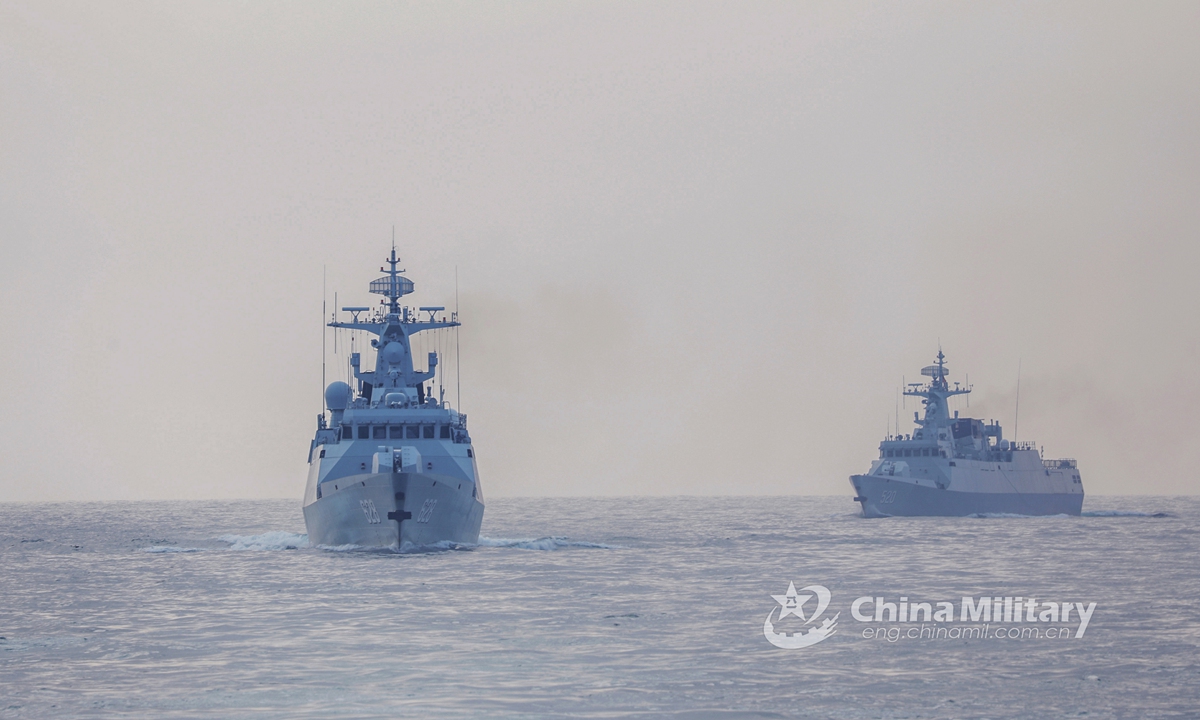 PRATIK JAKHAR writes for The Interpreter: Five years ago on this day, an international tribunal in a landmark ruling dismissed Beijing’s claim to much of the South China Sea. The Permanent Court of Arbitration at The Hague said on 12 July 2016 that there was no evidence that China had exercised exclusive control historically over the key waterway.

go to the analysis: Whatever happened to the South China Sea ruling? | The Interpreter (lowyinstitute.org)

A hearing in session from the Permanent Court of Arbitration in the case of the Republic of Philippines vs the People’s Republic of China, with a ruling delivered in 2016 (PCA 2013-19)
Page 1 of 3
1 2 3 Next »