Against a backdrop of growing regional rivalry, March and April 2021 surveys conducted in the United States, Japan, and South Korea show that publics in all three countries share similar views of China’s growing influence and intentions. But the data also show that internal divisions within the US-Japan-South Korea relationship will pose challenges to deeper cooperation

The U.S. State Department has OK’d a sale of precision-guided weapons worth about $258 million to South Korea.

The sale, announced by the Defense Security Cooperation Agency on Wednesday, will help South Korea address threats on the Korean Peninsula and progress the transfer of wartime operational control to the country, the agency said.

Satrec Initiative, a satellite maker under South Korea’s Hanwha Group, will send a high-resolution imaging satellite called SpaceEye-T into low Earth orbit by the first quarter of 2024, in the first step toward building its own constellation of Earth observation satellites. The company unveiled the plan Aug. 18, saying SpaceEye-T will present its technological capabilities to potential civilian and military customers at home and abroad amid increasing demand for satellite-based Earth observation data.

South Korea will invest 16 trillion won ($13.6 billion) over the next 10 years in bolstering its defense capabilities in outer space. This includes 1.6 trillion won to be used to develop “core technologies” for military satellites. The Defense Acquisition Program Administration (DAPA), the national arms procurement agency, unveiled the roadmap Aug. 19, saying it will soon draw up a “master plan” encompassing regulatory, technological and industrial issues, in cooperation with related organizations and industries. 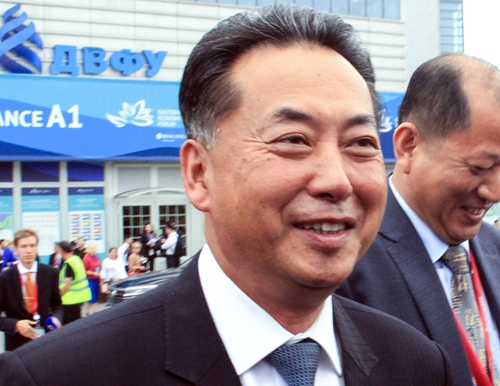 Ri Ryong-nam, North Korean ambassador to China, told the Global Times in an exclusive interview recently that a series of US-South Korea joint military exercises that started on Tuesday are the most concentrated performance of US hostile policy against North Korea. “It’s unwelcome and they will definitely pay the price for that.”

US is bound to pay a price for joint drills with S.Korea: N. Korean ambassador to China – Global Times

In early 2021, Israel’s ‘Iron Dome’ system was seen in action as numerous spiralling interceptors illuminated the night sky, defending against the straight lines of Hamas rockets. South Korea is weighing the possibility of introducing a similar military technology — but don’t expect it to change the inter-Korean military posture in a meaningful way.

In August 2021, the Bank of Korea (BOK) is set to begin a pilot program to examine the feasibility of a retail central-bank digital currency (CBDC). While the pilot is not a commitment to issue a CBDC, a decision to do so would move South Korea closer to becoming a cashless society with significant implications for both businesses and consumers.

Elliot Silverberg and Daniel Aum write: In June 2021, the United States and the European Union announced the creation of a joint trade and technology council, an initiative that aims to put democracies at the forefront of writing the rules governing digital trade. Despite their embrace of shared liberal values, the member nations will have to reconcile conflicting national interests. The council will also face resistance from China, which continues to extend the influence of its authoritarian model over the digital landscape. As nations jockey for position, the United States should expand its multilateral efforts in Asia — beginning with a three-way digital trade deal with Japan and South Korea.

Jinwoo Kim writes: Sometimes a political earthquake unfolds right before one’s eyes. Such was the case on 11 June 2021, when Lee Jun-seok was elected as the youngest leader of South Korea’s main conservative opposition party, the People Power Party (PPP). Riding the coat-tails of a convincing PPP sweep of by-elections in Seoul and Busan, the 36-year-old, Harvard-educated computer science major vowed to revamp South Korean politics.