The United States condemns the October 3 Houthi missile attack on the densely populated neighborhood of al-Rawdha in Marib, Yemen, which killed two children and injured an estimated 33 civilians, including women and children, according to UN agencies.  Civilians will suffer as long as the brutal Houthi military offensives continue.  There is an international consensus that now is the time to end the conflict, and the Republic of Yemen Government and Saudi Arabia have committed to stop fighting and resume political talks.  The Houthis are standing in the way of peace.

Since the beginning of the year, the Houthis have intensified their attacks, both inside Yemen and against Saudi Arabia, endangering the lives of civilians, including more than 70,000 U.S. citizens living in Saudi Arabia.  These actions exacerbate Yemen’s humanitarian crisis, which has already reached historic proportions.

We call on the Houthis to stop fighting and engage in UN-led talks to bring an end to this devastating war.

Fighting broke out between members of the separatist Southern Transitional Council (STC) in the Yemeni city of Aden on Saturday, leaving at least four fighters dead, security sources said.

The Yemen conflict killed or maimed 2,600 children as hostilities intensified in 2019 and 2020; that’s according to a new report of the UN Secretary-General on Children and Armed conflict in the country

The war in Yemen has caused a human catastrophe, torn society apart, and triggered “waves of mass displacement, repression and enforced disappearance”, the country’s Minister of Foreign Affairs said on Monday, the final day of the UN General Assembly’s annual debate.

President Joe Biden’s national security adviser, Jake Sullivan, is travelling to Saudi Arabia to meet Crown Prince Mohammed bin Salman to press the kingdom to move towards a ceasefire in the conflict in Yemen, US officials have said.

On Monday, Sullivan will become the highest-ranking Biden administration official to visit Saudi Arabia. Beyond meeting Prince Mohammed, who is popularly known as MBS, he is expected to meet Deputy Defence Minister Khalid bin Salman, The Associated Press news agency reported, citing two officials who spoke on the condition of anonymity.

The six-year conflict in Yemen currently sees a stalemate in Mareb and mounting losses by pro-government forces elsewhere. This has led to the resurgence of chaos in the war-torn country, which threatens stability across liberated areas of the south.

Houthi rebels based in Sanaa, the Yemeni capital, have made advances against pro-government forces in al-Baydha province. They have also pushed southern forces, Salafi factions and al-Islah affiliates out of southern districts. Houthis also claim to have defeated militants belonging to al-Qaeda in the Arabian Peninsula (AQAP), who fought alongside tribes, Salafis and pro-government forces.

The Resurgence of Chaos as Militants Surface in Southern Yemen (fairobserver.com) 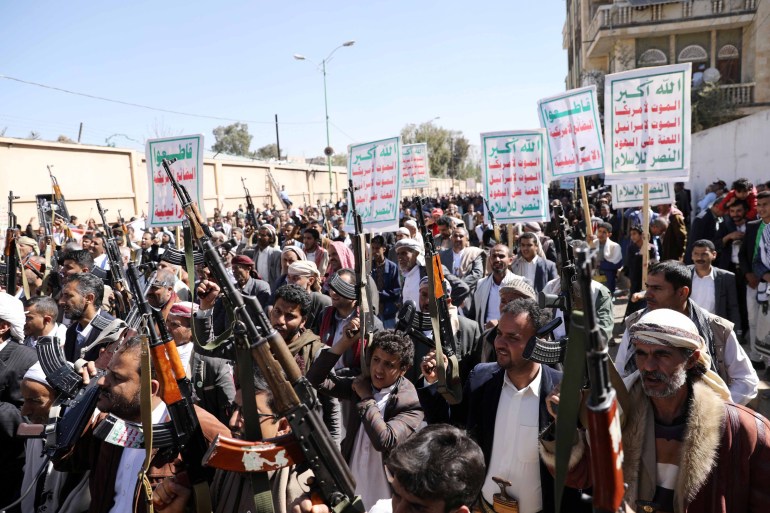 Yemen’s Houthi movement says that authorities have executed nine men convicted of involvement in the 2018 killing of Saleh al-Sammad, then the armed group’s top civilian leader.

Al-Sammad, who held the post of president in the Houthi-controlled administration that runs most of northern Yemen, was killed in April 2018 by a Saudi Arabia-led coalition air attack in the port city of Hodeidah on Yemen’s west coast.

Despite more than six years of Saudi-led military offensive against the Houthis, the situation in Yemen remains extremely complex and challenging for the Kingdom of Saudi Arabia. The Houthis have captured large parts of the Yemeni territory in the north-west of the country including the capital Sanaa. The Saudi-led military coalition’s twin objectives of pushing the Houthis back from Sanaa and reinstating the internationally recognised government of President Abd Rabbu Mansour Hadi remain unfulfilled.

Thousands of civilians have been displaced in Yemen’s Marib after a Houthi offensive that began at the start of September saw the rebel group take control of a key district in the south of the governorate.

Rahabah, which lies to the east of the Houthi-held capital Sanaa, was captured on September 8 after heavy fighting that led to at least 65 fighters’ death on both sides.