The Office of the Commissioner of the Chinese Foreign Ministry in the Hong Kong Special Administrative Region (HKSAR) on Saturday expressed “great indignation and firm opposition” to the US’ latest sanctions on six officials from the Chinese mainland and the city, saying that any interference or sanctions will be countered firmly by all Chinese people.

“Any interference and sanctions would only make the Chinese people more united and only be countered resolutely by all Chinese people, including compatriots in Hong Kong,” the office said in a statement, “[they] would not be able to shake China’s firm resolve in safeguarding its national sovereignty, security and development rights.”

The HKSAR government on Saturday also expressed its “utmost anger” at the US sanctions, denouncing the move as “insane, shameless and despicable” and vowing to fully support the central government in adopting appropriate countermeasures.

The Hong Kong Police Force (HKFP) and a national legislator from the HKSAR also showed stunning defiance over the sanctions imposed by the outgoing Donald Trump administration, vowing to continue to firmly protect national security, which they described as a “responsibility and honor.”

Even in its final days, the Trump administration continue to try to interfere with China’s internal affairs in Hong Kong, as US Secretary of State Mike Pompeo announced sanctions against six Chinese officials Friday.

The US also targeted Tam Yiu-chung, Hong Kong’s delegate to the Standing Committee of the National People’s Congress, and You Quan, head of the United Front Work Department of the Communist Party of China Central Committee. Sanctioned officials are banned from traveling to the US or accessing the US financial system, VOA reported. 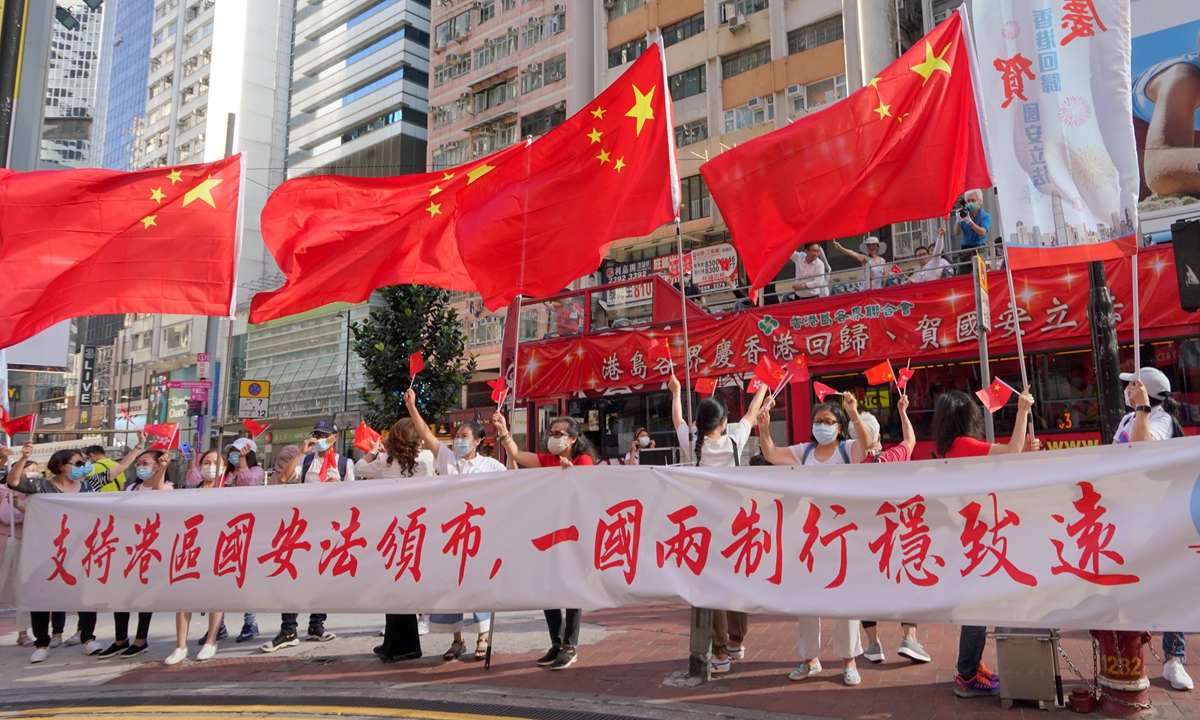 Speaking on behalf of her senior colleagues who have been targeted in successive acts by the US Department of State since last August for their involvement in the enactment of the National Security Law, Chief Executive Carrie Lam said that such a deplorable move is illegitimate and violates the established principles of international law, according to the statement, adding that the US move will not achieve its objective of implicit subjugation.

Lam said that she and her colleagues are discharging an honorable duty to prevent, stop and punish, in accordance with the law, acts and activities endangering national security and that they will not be intimidated.

The Hong Kong government will fully support the central government in adopting appropriate countermeasures, according to the statement.

In response to the US sanctions, the HKFP stressed in a statement to the Global Times on Saturday that it was not afraid and would continue to firmly safeguard national security and the safety of Hong Kong, which it described as a ” responsibility and honor.”

The US government ignores the laws and impose unfair sanctions to interrupt HKPF’s law enforcement, advocates illegal actions and strikes against Hong Kong’s judicial independence and autonomy, the HKPF said in the statement.

Echoing that sentiment, Tam also said in a livestream on YouTube Saturday afternoon that he had long been expecting the sanction and stressed that it is a honor to safeguard national security.

Chinese experts said that the US sanctions were nothing new and only demonstrated the fact that the Trump administration is at the end of its wits toward such issues.

“The US is busy enough with its own chaotic power transition, so its intervention in Hong Kong affairs is weakening,” Li Xiaobing, an expert on Hong Kong, Macao and Taiwan studies at Nankai University in Tianjin, told the Global Times on Saturday.

Unlike in 2019 when Hong Kong was dealing with social unrest, the city has now put up a protective umbrella in accordance with the national security law for Hong Kong, so that the US could no longer easily exert influence on the city, Li noted.

As part of an escalating anti-China campaign, the Trump administration has unilaterally imposed a series of sanctions since last August on dozens of Chinese officials, including HKSAR Chief Executive Carrie Lam Cheng Yuet-ngor, Luo Huining, director of the central government’s liaison office in the HKSAR, and 14 Chinese officials from China’s top legislature.

“The US may have a list of all Chinese officials related to Hong Kong issues and plan to sanction them all, but what happens after that? To sanction related experts and media?” Li asked.

Li pointed out that the sanctions, which did not exert pressure as the Trump administration expected, actually demonstrate the limitation, uselessness and randomness of US’ China policies.

The latest sanction came after the Hong Kong Police Force confirmed on January 6 that they had arrested 53 people on charges of subversion, including six involved in organizing and planning it, in a move experts said was a legitimate and long-awaited action.

The Trump administration, which is slated to end its term on January 30, has also imposed sanctions on Chinese businesses.

Commenting on the US sanctions, Chinese Foreign Ministry Spokesperson Zhao Lijian expressed opposition to the moves at a press conference on Friday, noting that China would take necessary measures to safeguard legitimate rights and interests of Chinese companies.

Responding to threats of sanctions from Pompeo over Hong Kong affairs on January 7, Hua Chunying, also a spokesperson for the foreign ministry, said that the mainland firmly supports relevant authorities in Hong Kong in cracking down on criminal offenses according to the law. China will resolutely safeguard its sovereignty and security interests, Hua said.